Blog Post: The State as an Organism: The Biopolitics of “Contagion”

Anton Cebalo, MA student in the Politics, Cultures and National Identities programme of Leiden University wrote a blog on the film Contagion, directed by Steven Soderbergh (2011)

The film Contagion follows the rapid spread of a virus which grips the entire world in social disorder and hysteria. In doing so, the film relates how uncontrolled pandemics can shake the foundations of civil society. One can see this steady progress as the virus begins its spread from a small group of hosts and quickly expands to include much of the globe. The end result is civil strife: looting, outright violence, riots, and multiple factions fighting for legitimacy in a crisis of faith in institutions. The film demonstrates the social contradictions of pandemics: individuals must be isolated to halt its spread, but people must also inevitably work together to find a cure. The end result is a paranoiac social environment where distrust is rampant as everyone is afraid of the “unknown” —an environment where everyone is suspect of being a potential infectious carrier.

Contagion thus takes a macro-level analysis of pandemics and applies it to the micro-level of individual social units. In this way, the structural decisions of the CDC and government officials result in a cascading ripple effect which is felt at every level of society. Mitch Emhoff, played by Matt Damon, is cast as the “everyman,” who although is not aware of the complex power dealings at the top, nonetheless feels the pull of social disorder in his immediate life. This structural perspective is only underscored by the global nature of pandemics, and how nation-state governments can often act as impediments towards global solutions in the face of such health crises. 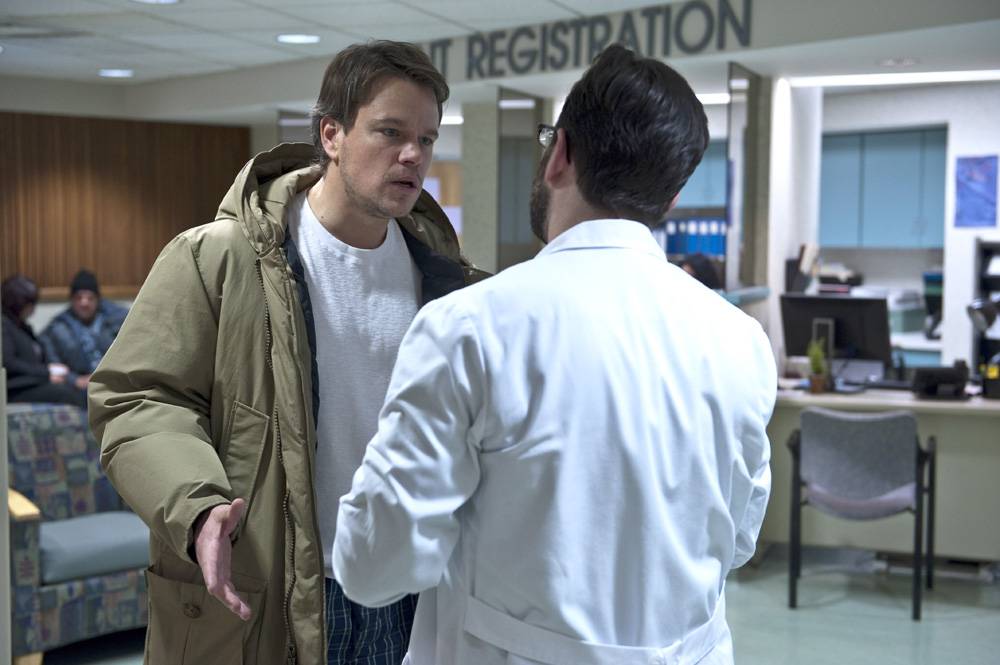 A Still from Contagion (2011), showing the desperation of Mitch Emhoff, the main character (played by Matt Damon)

When viewed through the realm of biopolitics, the entire social sphere can be viewed as a metaphor for illness itself. If we view the state as a quasi-biological organism, we can see how the pandemic first causes disorder within highest levels of state power. Then, like spreading through a body, the chaos multiples: first, trickling down through media, then to individual towns, stores, local governments, and so on, until it infects the entire social organism. Even the circulation of capital, like blood, is cut off from certain segments of the social body resulting in further illness. In this way, the intensifying social strife caused by the pandemic is analogous to its biological spread in the body. Disruption at one sector of the social organism necessitates crises in others, resulting in looting and violence. Curfews and methods of social control are used to quarantine dangerous elements within the social organism, as the body fights off the virus’s spread. Eventually, units of the social organism—the police, local governments, and so on—begin to shut down as many defect, die off, or become consumed by the illness of the social body. The social body becomes injured and, if left untreated, there is a probable chance it might die.

Therefore, in Contagion we see how a viral illness and its spread biologically is analogous to its malicious growth in the social body. Bodies are infected one-by-one, but the greater organism—civil society—is the ultimate host which is injured as a result. Casualties can multiply rapidly if the social body cannot effectively regulate itself in the face of such existential danger. When faced by such a pandemic, state power reverts back to one of its original functional roles: the regulating of bios or life. This fundamental principle is what is called into question as the hysteria of the pandemic continues to consume the masses. By the end of the film, however, the virus is not able to effectively kill the state-led ‘head’ of the social body. Nonetheless, the social body must drastically rebuild itself, potentially leaving it paralyzed for generations to come.