Disability on Display – Part II: ‘A history of Denmark that must not be repeated’

„Little Henrik, about six years old, sits in his wheelchair with bracers around the spastic arms to prevent them from contracting, so that the muscles don’t become too short. ‘He is a pretty boy, but ‘empty’, they say. But his eyes aren’t empty. I place a picture book in front of him. The book stands on its head. With pain and misery he manages to turn it around, despite the bracers and jerky movements. When the picture is the right way up he gives me a radiant smile. He is not empty.”

Part II: ‘A history of Denmark that must not be repeated’: The Danish Museum for the History of Mental Disability Care (Dansk Forsorgshistorisk Museum), Slagelse

The boy to whom we are introduced in the above quote has been a patient at Andersvænge, a former institution for people with intellectual disabilities. Opened in 1940, Andersvænge was not only the latest addition to the already existing ten Danish asylums, but took pride in its relatively modern orientation. Decentralized buildings surrounded by fields and meadows ensured self-sufficient supply with agricultural products, while workshops, gardening and agriculture provided occupation for those residents deemed capable of working. From the 1960s onwards, the institution boasted a school for both children and adults. 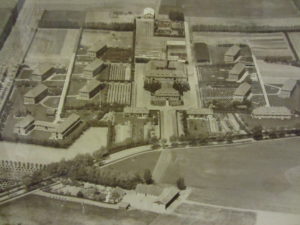 Aerial view of Andersvænge, today the Danish Museum for the History of Mental Disability Care, in Slagelse. All photos by Anna Derksen.

Over thirty years ago, institutions in Denmark began to be closed down on a large scale for the benefit of smaller residential units. Some of these accommodations can now be found on the site of former Andersvænge asylum, alongside a centre for people with autism, a culture house with gallery and other facilities. My destination was the former kitchen building, which now hosts the Danish Museum for the History of Mental Disability Care – a combination of library, newspaper and photo archive as well as an exhibition area that allows profound insights into the lives and treatment of people with intellectual disabilities in the past century. Here, I was received by Henning and Jonna, volunteers and former employees in the disability sector, who introduced me to the history of the place and its inhabitants. Seen from the outside, the closed-in character of the institution has long since fallen off. But in the exhibition it becomes evident that for a long time the dominant concept had been ‘social control’. 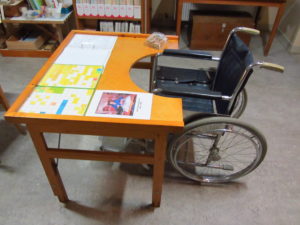 A specially designed desk for wheelchair-bound pupils in a setup of the former classroom.

The quality and performance of patients’ care was highly dependent on general psychiatric knowledge and contemporary attitudes towards mental disability – by a majority of the doctors, medical experts and politicians they were seen as useless, even dangerous for a relatively homogeneous society such as Denmark’s, with an extensive welfare system that depended on the tax revenues from able-bodied (and able-minded) citizens. Though the medical personnel is not to be accused of intended cruelty, the treatment itself could be cruel, or careless. As in other countries, the presumed harmfulness of mentally disabled persons to public health was then used to justify institutionalization and the degrading and abusive methods of isolation, sedation and fixation that were part of the daily institutional routine, in some cases even into the 1970s. 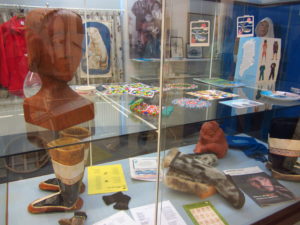 Between the 1950s and 1970s, many Greenlandic children with mental and intellectual disabilities had been placed in Danish institutions, the majority of them in Andersvænge. Clothes, artwork and personal mementoes are now on display in the museum.

After a wave of racial hygiene in the 1940s, marked by institutionalization, sterilization and eugenic discourses, the introduction of the normalisation principle formulated by the Dane Niels Erik Bank-Mikkelsen in 1959 and the so-called Mental Retardation Act brought about a hesitant positive change. Living conditions should now be as close to the ‘normal’ society as possible, including education, work and social activities. However, for persons with mental and intellectual disabilities the situation hardly improved as special institutions and isolation practices persisted. Medical examinations, forced sterilisation and even lobotomy (the ‘white cut’) were performed up to the 1980s, when new legislation finally led to radical legal reforms and the eventual closure of centralised institutions. The museum captures this long path from forceful segregation and hospitalization to the recognition of equal rights through a wide variety of objects and full-scale models of former rooms, like a dormitory, a nurse’s room, a surgery and different kinds of workshops, each set up with a keen eye for details and unexpected encounters. 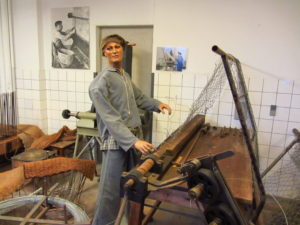 What is even more insightful, and evocative, is the endeavour to let the people connected to Andersvænge speak for themselves – about their memories, experiences, dreams and fears. Former patients as well as staff members get a chance to share their personal narrations. Andersvænge had festivities, excursions and dedicated teachers and caregivers who tried to give individual support. The teachers were the first in the country to critically scrutinize the narrative of the ‘uneducable child’, and advocated for patients from Greenland, who were mainly accommodated at Andersvænge, to maintain their old social bonds through regular vacation journeys and written contact with their families. Their stories, like the recollection about the boy Henrik, show the rift between the well-defined system of treatment and the individual needs of the patients, which were often recognised by the staff but could not be met in the stress of precisely timed routine. 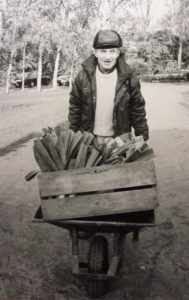 …Women were predominantly occupied with textile work or in the gardens, while the men made fishing nets, worked in agriculture, the carpentry or the metal workshop.

Daily life also had its shady sides – toys the children could only play with when high-ranking visitors came, medical sedation of patients with ‘challenging’ behaviour, or fixation as a means of punishment. Nor should it be forgotten that there was a medical research department for the study of mental disabilities, which made use of both human remains and living ‘objects’. A former employee narrates:

“A tall strong carer in white uniform comes in and holds a small grey hanging head in his arms. One needs a good firm grip on the patient. The senior physician tells his students: ‘Here you see an example for microcephalus and here, in this jar, a corresponding brain. You can ask him questions and see how such a brain operates.’ Some stared at him, others asked relevant questions. The patient was painfully aware of the situation, because he knew only too well it could be his friend’s brain that lay in the alcohol, or maybe it was his own little brother who had died last year.” 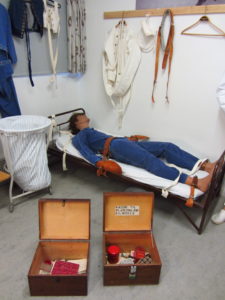 Fixation was used as a means to calm upset and aggressive patients, to keep them from roaming, but also as a punishment. The boxes in the front contain personal belongings.

After my visit a bitter aftertaste remains, but also a better understanding of how (intellectual) disability, society and welfare were linked in 20th century Denmark. It is difficult for an institution, and the people who worked and lived there, to open up to their own difficult past and take a critical step back. The story narrated in the exhibitions is no attempt at self-justification, and neither does it omit historically sensitive issues. The museum at Andersvænge with the help of dedicated staff and researchers has been equal to the challenge and may serve as a good example for other institutions for intellectually disabled people worldwide.

In an era in which prenatal screening has made it possible to detect and prevent genetic and chromosomal diseases, disabilities such as Down syndrome are becoming increasingly rare. And as their number dwindles, some fear that a significant component of our social diversity will disappear with them.