A language for equal opportunities: easy-to-read and intellectual disability in Sweden (Part II)

“The individual rights of the retarded person as a human being”
In 1965, after the public discussions and protests of disability activist organizations had seriously questioned the legitimacy of exclusion and special institutions, Sweden established a National Disability Commission as a first signal that politicians took the demands seriously. But the country also became a stage for international discussions on the issue. In June 1967, the International League of Societies for the Mentally Handicapped organized a symposium on “Legislative Aspects of Mental Retardation” in Stockholm. Next to practical issues like accommodation, education and rehabilitation, one topic was central:

“the basic rights of the mentally retarded, not only from the standpoint of their collective rights and those of their families, but also from that of the individual rights of the retarded person as a human being.”

This proved to be a first step towards change, as Sweden adopted a new law on the care for persons with intellectual disabilities, which included the first official acknowledgement that persons with ID had the right to the same opportunities and living conditions as others. 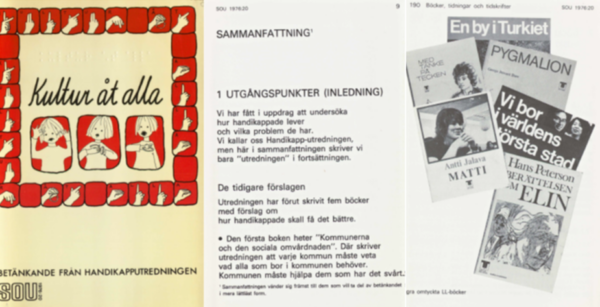 ‘Culture for All’ (1976) included summaries in lättläst, discussed accessibility and promoted easy-to-read books.

Disability began to emerge as a distinct policy area in which politicians, administration and interest groups closely cooperated. The creation of lättläst falls into this context. Sommaren med Monika was an experiment. Guidelines did not yet exist, and neither did research on how it was received. And another problem emerged as more and more books, from Bernard Shaw’s Pygmalion to Alexandre Dumas’ The Count of Monte Cristo and even poetry were translated: They were often a rather dull read, gathering dust on the shelves of public libraries while the intended readers had no access or even knowledge about them.

A key to equal opportunities?
The National Disability Commission addressed this issue in its final report Culture for All (1976):

“The market for such books is huge and the needs are insufficiently catered for. Many who would benefit from easy-to-read books do not know they exist. It is therefore important to provide more information about them. We believe that mentally disabled people and others with reading difficulties must have access to significantly more books.”

The publication of lättläst literature under the aegis of the National Board for Education continued, was refined and broadened – but the focus was still on works of a certain literary canon, meant to be read at home and contributed little to actual cultural participation.

During the discussions and events of the International Year of Disabled Persons in 1981, persons with ID, interestingly, hardly played a role at all. The development of lättläst instead seems to have happened on a different stream than the general formulation of disability policies, which were influenced by the much more established collaboration with persons with physical and sensorial disabilities.

Despite this detachment from key actors of the Swedish disability movement, the1980s saw rapid changes for persons with ID. Prompted by parents’ and advocacy groups as well as public officials, the newspaper 8 SIDOR (8 pages) and the state-funded foundation Lättläst-stiftelsen were created. In 1997, the foundation changed its name to the Centre for Lättläst (today the Swedish Agency for Accessible Media) and broadened its services considerably, recognizing that the need for easily accessible information and books was more widespread than initially thought. Today, their target group includes persons with ID just as much as elderly, immigrants and other people with reading difficulties. Or anyone else who wants access to easy and quick information for that matter: lättläst versions of election programs are becoming more popular than the originals.

Conclusion
Since its inception, the concept of lättläst has come a long way. What started in the 1960s as an idealistic but somewhat immature idea to bring persons with ID into contact with literature has become an established tool to improve social contacts as much as accessibility to information and culture for a diverse group of people.

I would argue that the decision to grant persons with ID social rights in the 1960s/70s, including the right to culture, was a radical break with previous policies, but in tune with contemporary imaginations of the welfare state. To become a truly democratic and solidary society, the participation of every citizen was imperative – and for this, an understanding of what citizenship entailed. The welfare state was a social project conceptualized by policymakers, which made the care, but also the integration of marginalized groups a distinctly political task. Support organizations and persons with ID played an important part. They demanded equal opportunities and created visibility through their own clubs and gatherings, effectively undermining arguments that tried to justify their social exclusion.

Two actors at seemingly opposite ends, the Swedish state as an ‘engineer of society’ and persons with ID as passive recipients of care, were brought closer together by advocacy as well as political rationale. This short history of lättläst shows that a common ground was found in the idea of simplified language as a door-opener to culture, information and a mutual exchange of opinions – an idea that enjoys growing popularity to this day.

A language for equal opportunities: easy-to-read and intellectual disability in Sweden (Part I)

Making the built environment accessible has almost become a matter of course. When dealing with information and language, however, we still have a long way to go: Probably most of us have struggled with the complex jargon of public authorities.