‘A Right to Live Where They’re at Home’: Identity, Nation-Building and the International Year of Disabled Persons 1981 in Greenland

Vision of inclusion: aasivik ‘81
In the summer of 1981, fifteen disabled Greenlanders went aboard the MS Disko, travelling along the rugged coastline of West Greenland to the abandoned village of Illorpaat about 425km north of the polar circle. Their destination was the annual aasivik, originally an Inuit summer gathering on plentiful hunting grounds. Since 1976, the tradition had been resurrected as a music festival and discussion forum for political, social and cultural issues closely linked to Greenlandic identity and independence.

The group of disabled participants was assembled by the Greenlandic working committee for the UN International Year of Disabled Persons, the aasivik planning group, and the Association Greenlandic Children, which launched a public call via posters and radio. Together with four professional attendants and the welcoming reception of the other non-disabled participants, they took an active part in the social meetings, coffee breaks and concerts. Two of them – wheelchair users Kristine Egede and Susanne Johansen – took the stage to tell about their life stories and everyday experiences on a special ‘disability day’. Inclusion was the main aim of the endeavour, and it was judged a resounding success:

“The primary goal of the participation of the disability group at the ‘Aasivik’-camp was not only the special day, but first and foremost to be part of the many diverse events and to experience the social get-together with the other participants, children, youths and elderly. And this has been a success beyond all expectations.” (Det Grønlandske Selskab: 282) 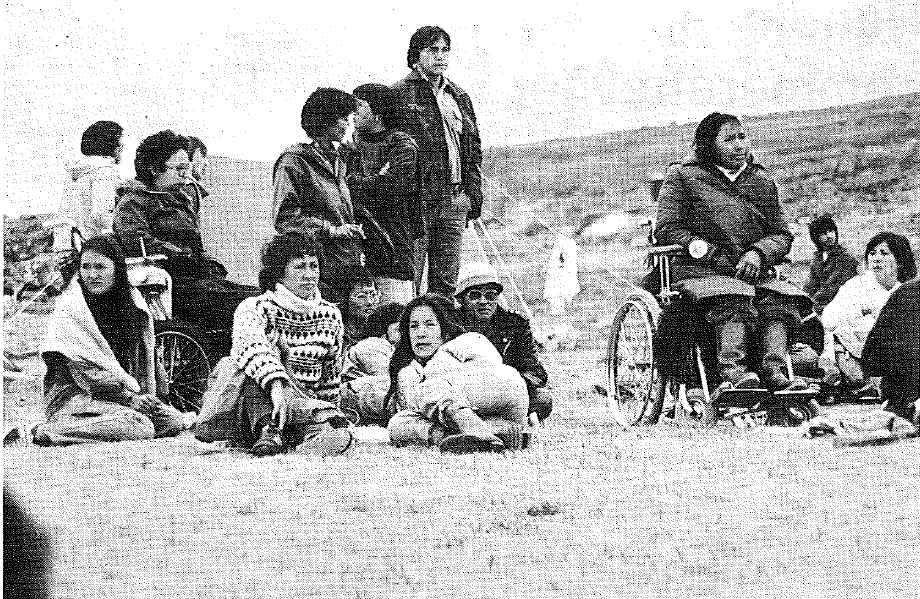 Disability – both with regard to the participants and the topic in general – had been largely absent during previous editions of the aasivik, but in 1981 it had suddenly become a hot topic. The reason is twofold: The new home rule administration that had taken office after a referendum in 1979 was still in the process of establishing a social security network on the vision of an inclusive Greenlandic society. At the same time, the International Year of Disabled Persons (IYDP), announced by the UN in 1981, put disability onto the global agenda and promoted a social understanding of the topic based on the slogan ‘full participation and equality’.

In the case of Greenland, these two developments combined provided fertile ground for new approaches. Though rather off the radar of socio-historical research, the transition of Greenland towards an autonomous society is a small but striking example. It offers us not only interesting insight into the conceptualization of disability in a specific local context, but highlights a unique entanglement of disability with nation-building processes and the search for a common culture and identity.

A Danish province ‘vacuum-cleaned’ of its disabled citizens
Since Greenland became an integral part of the Kingdom of Denmark in 1953, the establishment of social services and institutions had largely been in the hands of the Danish authorities. The ambitions to modernize the vast and inhospitable island had positive outcomes for sure, such as the provision of education, hospitals and doctors, an improved infrastructure, and civil rights and duties equal to those of the mainland Danes.

One group, however, was conspicuously absent in this new society: Disabled persons, especially those diagnosed with an intellectual or cognitive disability, already since the 1940s had been systematically identified and mapped by Danish doctors regularly touring the Greenlandic coasts. Their diagnosis was mainly based on medical conditions, but some, like Carl Clemmesen, also took specific social capabilities into consideration:

“Strong boys who had trouble learning to read and write, but who confidently manage to ride the sledge or are diligent fishermen, can maybe with regard to their mental abilities be called feeble-minded, but if they get along well socially then this is, practically speaking, no intellectual disability.” (Clemmesen: 63) Participants came to the aasivik by ship and were housed in tents and the local school building. Left to right: Lars Rasmussen, Johane Alaufesen, Elisa Sanimuinnaq, Juliette Maqi.

These considerations notwithstanding, most diagnosed children were sent to care institutions on the Danish mainland, where they would lose almost all ties to their families, communities, language and cultural identity – in the eyes of many, a severe violation of fundamental rights. Newly adopted Danish legislation on mental disability in the 1950s and 1960s, guaranteeing education and basic training, did not become effective in Greenland. Plans to establish a local institution with native Greenlandic personnel were never put into action.

The locution of a ‘vacuum-cleaned’ Greenland, in which almost all persons who had mental disabilities, visual, hearing or physical impairments were sent to leave the country either for short-term rehabilitation or life-long hospitalization, succinctly captures the situation. It also hints at another problem: Where there are no persons with disabilities visible on the streets, a feeling of ignorance, unease and rejection might manifest in society that is hard to overcome. This should become a major focus of the IYDP.

Things started to change in the 1970s, as the waiting lists for Danish institutions grew ever longer and Greenlandic authorities became increasingly interested in providing local solutions for education, work, and also disability care. A common project between a Greenlandic school and Andersvænge institution in Denmark furthered the integration of mentally disabled pupils into local primary schools – a pioneering endeavour as special education was still very present in Denmark. The project furthermore re-established contacts and visits between disabled children and their left-behind families. Framed as a human right, this was a powerful message towards the Danish authorities. 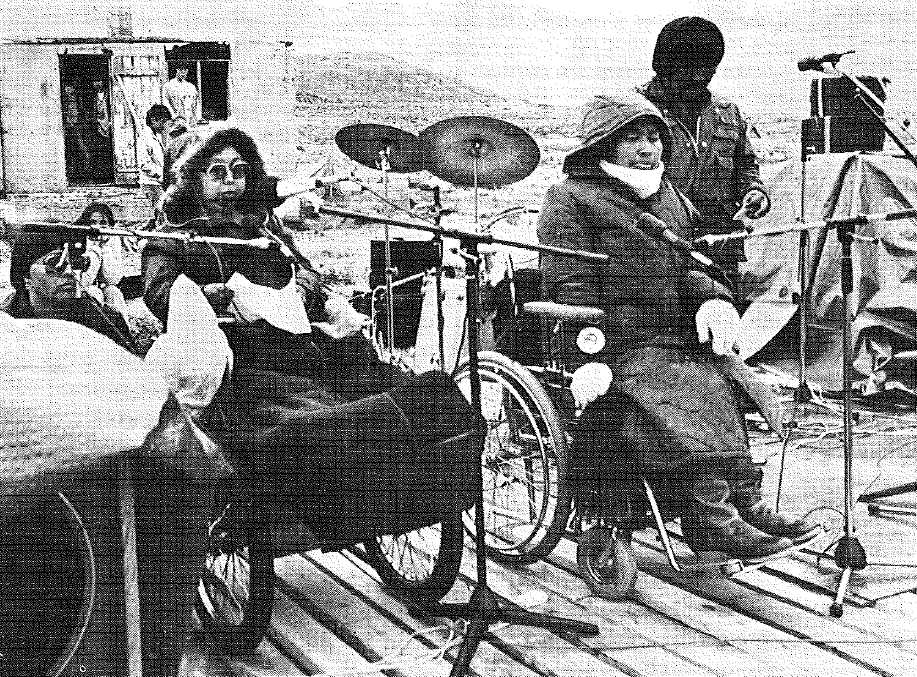 The disability day was a central part of the overall program. The picture shows Kristine Egede and Susanne Johansen telling about their ‘life stories’ and the social situation of persons with disabilities in Greenland.

As the voices demanding Greenlandic self-government and independence became louder, the fact that many Greenlandic citizens had been sent to Denmark without their consent led to growing discontent. The search for a common identity that was built on traditions, norms and values beyond the Danish model also brought up the question of how to culturally ‘re-educate’ disabled persons, some of whom had been out of touch with their country of origin for years. Disability was “no longer about the right to equality, but the right to be a Greenlander.”

With home rule attained in 1979, and the Danish care reform from 1980 that moved the subject of care from the state to the municipal level, Greenlandic authorities got the sole responsibility for Greenlanders with disabilities. Their explicit objective was to keep all disabled citizens in Greenland, and to bring back those who were thought to have a chance for re-integration as quickly and smoothly as possible.

Building the Greenlandic society
The IYDP provided the opportunity to assess the current situation of Greenlanders with disabilities and discuss their problems, needs and wishes against the background of broader human rights discussions. In line with the UN aims for the IYDP, disability was to be understood as a social, not a medical issue. The Danish system of institutionalization, so decisive for the Greenlandic perspective, was unanimously rejected. Instead, the working committee for the IYDP tried to formulate aims for a new social welfare system catering to the diverse demands of this group, as well as dispersing its vision of an inclusive society that was to be based on specifically Greenlandic values of the family and settlement community. 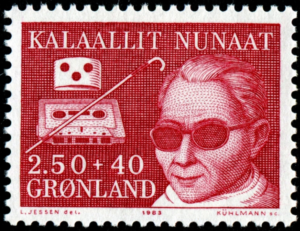 Stamps were a popular tool to raise public awareness about disability – not least in Greenland.

Though the aasivik was probably the most visible – and popular – attempt to combine disability inclusion with socio-political action and national identity, it was not the only measure of the Greenlandic IYDP. Public outreach focused on posters, folders, stamps, radio features and newspaper articles. Novels, short stories and poetry about disability issues were gathered in an authors’ competition. The ‘terminology group’ tried to find adequate Greenlandic expressions for disability-related words, and another group worked on the establishment of new disabled persons’ organizations. A large survey on the provision of care and welfare for disabled, seminars and thematic weeks brought together different stakeholders.

Despite these rather enthusiastic attempts, its colonial past and the rough terrain provided Greenland with severe problems, some of which have yet to be fully resolved: A lack of adequate housing, experts and social workers, and the experienced loss relating to Greenlandic culture. Even today, many Greenlanders diagnosed with a cognitive or intellectual disability are (still) living in Denmark.

Conclusions
Though there is still a lot to be done, the starting shot for social change was fired in the late 1970s and early 1980s. Home rule, the Danish care reform, and the IYDP culminated at just the right time: A period of transition during which Greenland engaged in crucial discussions about who they wanted to be as a society. Regarding disability, there was ‘no way back’ – with the determination to fully implement disabled persons’ citizenship and rights, inclusion was now up to the Greenlandic society. To translate the international disability discussions of the IYDP into a very specific local context, with the ‘inclusive vision’ of the aasivik as a possible model, thus became an integral part of Greenland’s nation-branding strategy. 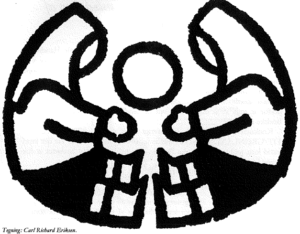 „Persons with disabilities have the right to full participation in society’s life and development. It is our duty to give them the opportunity to make use of this right.” Logo of the Greenlandic Social Directorate