8 May 2017 by Anaïs van Ertvelde in Blog Rethinking Disability

Film festivals are a core site of disability culture labor’, Petra Kuppers posits in her 2014 publication Studying Disability Arts and Culture. The disability culture activist, performance artist and professor at the University of Michigan goes on to point out that the increased accessibility of recording devices has made it easier than ever before for minority groups to take representation into their own hands. Technological possibilities – video cameras on every smartphone, online communities pooling resources and facilitating distribution – are opening up new ways of representing, sharing and educating through cinematic means.

And indeed, in the last two decades many disability film festivals have sprung up the world over: from the Bay Area’s classic Superfest (http://www.superfestfilm.com/) – in all likelihood the world’s longest running disability film festival with roots going back to Los Angeles in the 1970s; over Brazil’s International Disability Film Festival Assim Vivemos (http://www.assimvivemos.com.br/2015/) the first edition of which coincided with Brazilian public policies concerning people with disabilities being established in the early 2000s; and the ‘travelling’ Sprout festival (http://gosprout.org/film-festival/), which focuses on people with developmental and intellectual disabilities in particular; to India’s international Disability Film Festival AbilityFest (http://www.abilityfoundation.org/ability_fest_2015.html) which has had six editions since 2005. Since last year even glitzy Cannes boasts it’s own Festival International du Film Sur Le Handicap (http://www.festival-international-du-film-sur-le-handicap.fr/festival.html). 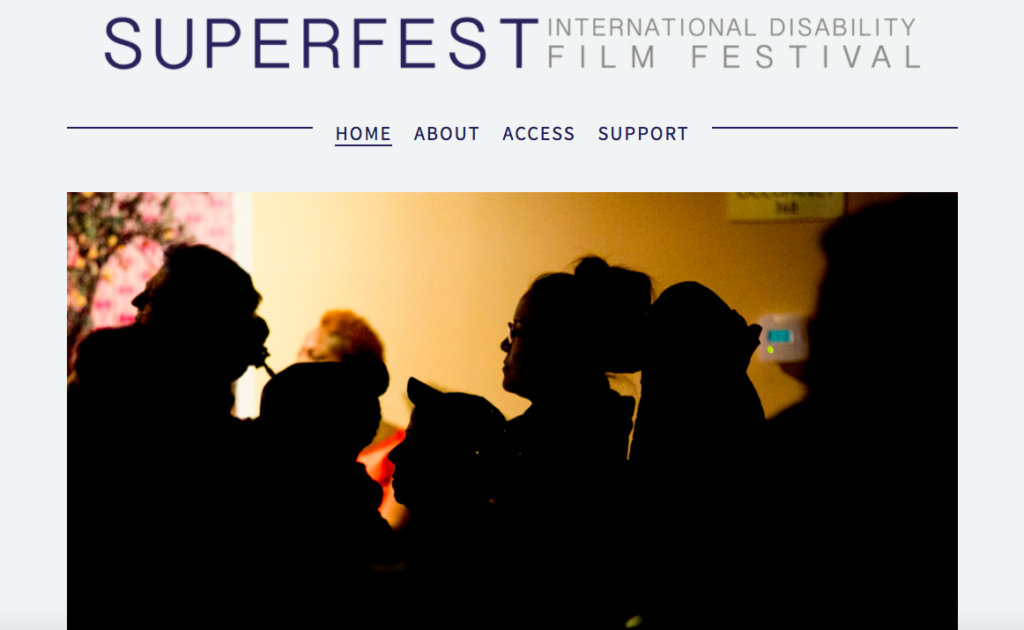 Way before this contemporary surge in accessibility to the means of film production, film festivals have taken up a special place in the different emancipation movements of the second half of the twentieth century. LGB liberation notably adopted the film festival as an activist site. Organisers soon noticed that screening films with LGB themes had two major potential functions: enticing the general public to identify with LGB people; and creating an LGB culture that confronts mainstream norms and does not shy away from provocation. Films portraying sex especially were part of the balancing act between these two functions. Sometimes erotic films were alluringly brought to the screen, sometimes they were explicitly tucked away for relatability’s sake, depending on the activists’ goals of the moment. The flourishing of activist film festivals from the 1970s onwards makes sense. They were simply one of the only places were documentaries such Gay USA or films as Pink Narcissus could be viewed. Recent technological advances, might thus summon a question of quite a different nature. Why are disability film festivals still indispensible? Today interested viewers can find practically any film online and watch even the most obscure of documentaries in the comfort of their own living room. Technological availability alone does not evidently lead to the heyday of disability film festivals.

Given their recent proliferation and the amount of attention that both disability studies and disability history have paid to the cinematographic representations of people with disabilities, it is remarkable that few words have been written about disability film festivals. Only a handful of articles, which do not engage with a historical approach, set out to take a closer look at the distinctive features of disability film festivals. They characterize these festivals as social concern festivals where political activism predominates and the main aim is to provide a depathologising context, distant from the biomedical domain, a space to think and feel outside of pre-established conceptual and normative frames, a space to question aesthetic ideals about what are considered healthy and able bodies (Bohrer Gilbert, 2014). Festival spaces are said to play a crucial role in the process of identity building for people with disabilities – who are in general quite invisible in the identity politics of social movements (Snyder, S. & Mitchell, D. 2008). Granting all this, the authors mentioned above also acknowledge that there are ongoing difficulties with the attempts disability film festivals make to get away from stereotypical or medical frames of reference. The very term disability itself is rooted in medical terminology and clusters together wildly different embodied life experiences. Exactly how all these different life experiences are included in the films on show and the festival space itself, or how these interact with the public’s existing notions of disability remains rather elusive.

Universally accessible websites need to be taken into account.

In a departure from other social concern festivals, disability film festivals’ interest in inclusion and accessibility lies not only within the realm of cinematic production and representation. The film festival functions as a mirror: providing people with disabilities with complex and distinct narratives in which they can see themselves (partially) reflected. It serves as a window through which able-bodied people get a rare view of disability stories that go past stereotypical and monolithic depictions of tragedy, loss, heroism and gratitude. But disability film festivals also operate as physical locations. Good intentions to take people with disabilities seriously on screen, as filmmakers and actors, and as an audience requires serious work on making festival locations accessible as meeting places and spaces for film projection. For people with disabilities’ battles against historical exclusion are not limited to representation and means of film production but extend to the physical space in which movies are shown, the manner in which they are shown, how they are advertised, and even how tickets for film screenings can be acquired. The actual experience of attending a movie becomes an issue of equality. It is not only ableist attitudes that solicit change, but an ableist material environment as well. Wheelchair accessibility, adapted seating, audio description, subtitles, and universally accessible websites, among others, all need to be taken into account. The organizational side of disability film festivals thus takes on a more significant part than it does for most other social movement film festivals.

In part two of this blog I sit down with Pieter Verstraete, professor of history of education at the research unit education, culture and society (KU Leuven, Belgium) and co-organizer of the Leuven Disability Film Festival to explore what it means to organize a disability film festival more in-depth.

The hallways of the Leuven provincial house are more lively than usual after dark. Scattered groups of people, most of them rather youthful, only a handful of them visibly disabled, are trying to find their way to the auditorium where one of the screenings of the 2017 edition of the Leuven Disability Film Festival, with the theme Bodies and Minds, will soon begin.