From the 2000’s onwards, provincial bylaws have been implemented in Indonesia that have criminalized certain types of same-sexual practices. This was followed in 2006 by a similar nation-wide law. LGBT human rights organization OutRight Action International has described this process as ‘creeping criminalization’, through which those who engage in same-sexual activities were put in an increasingly precarious situation.[i] These regulations went together with hostile anti-LGBT rhetoric from government officials and religious bodies, inspiring religious vigilante groups to repeatedly attack LGBT events, from 2010 onwards. Often, local police failed to protect LGBT activists, despite the fact that homosexuality and transgenderism in itself were not illegal in Indonesia, and the constitution guaranteed both the right to organize, and freedom of speech.[ii] 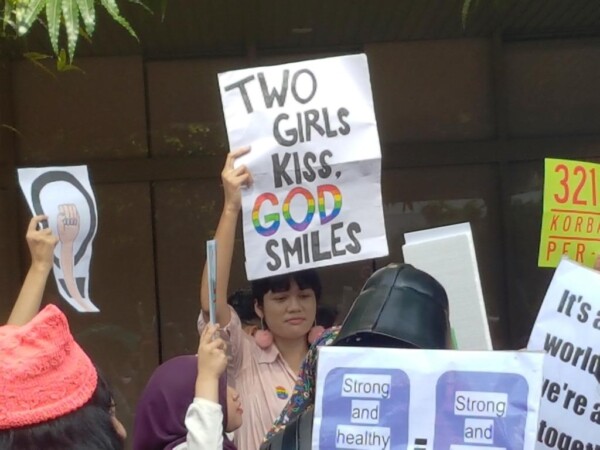 A protester in Jakarta holding a signboard.[iii]

These events have been reported on as human rights violations. As such, this particular case-study can give further insight into broader historiographical debate on human rights. In human rights historiography, there is debate on whether human rights is an inherently western concept, or if it has universal applicability. A contribution to this debate can be made by analyzing the usage of LGBT human rights rhetoric on the national Indonesian level, and the tension of this national usage with how human rights are claimed for people with nonnormative sexual orientations and gender identities internationally. Particularly important in this case are the specific concepts and the terminology that is used in human rights claims, which significantly influence whether they are interpreted as ‘western’.

International NGOs, such as Front Line Defenders, Human Rights Watch, and OutRight Action International, have used the acronym ‘LGBT’ to describe the above mentioned violations. National, Indonesian organizations have also used this acronym; for instance, Arus Pelangi describes itself as an Indonesian federation of lesbian, gay, bisexual, transgender, transsexual and intersex people. This is remarkable, because in international human rights rhetoric, the acronym ‘SOGI’, for ‘sexual orientation and gender identity’, is dominantly used. This has been the case since the publication of the influential Yogyakarta Principles on the Application of International Human Rights Law in Relation to Sexual Orientation and Gender Identity (2007), before which use of terminology was deeply inconsistent, and ‘LGBT human rights’ was often employed.[iv]

Problematic about the usage of the acronym ‘LGBT’ was that this term is tied up in identity politics, since it defined specific identities, such as ‘bisexual’ or ‘transgender’. These identities are culturally specific, tied to their western history. Their employment in human rights rhetoric thus means that human rights become limited to those willing to define themselves with these identity categories. As a result, the recognition that comes with state compliance with human rights norms is limited to those willing to define themselves within these identity categories. Many non-Western understandings of behavior and gender are curtailed by this, since the term does not cover the diversity of sexual expression available to human beings in different times and places. For this reason, SOGI was chosen in an attempt to claim universal applicability, describing a range of practices, identities and activities.[v]

The critique of ‘LGBT’ at the international level applies to Indonesia specifically. LGBT has been used because it helps certain groups to be politically recognized, but also because it resonates with potential supporters, and could raise funds from or build partnerships with international organizations. However, ‘LGBT’ does not readily fit with the plurality and complexity of gender and sexuality of the Indonesian context. The Bugis of South Sulawesi have a system which encompasses five genders, that cannot be neatly captured by the category ‘transgender’. Moreover, national gay and lesbi subjectivities are differently conceptualized than Western gay and lesbian identities, since they emphasize sexual acts, rather than identities. Gender and sexuality are mutually defining, impossible to conceptually separate.[vi] As such, Vanja Hamzic argues that the liberal legalistic discourse of human rights forcefully homogenizes gender and sexual relations, erases their inherent complexity, and superimposes western identities upon Indonesia’s complex reality, since it forces people to identify with the specific categories in order to be politically recognized.[vii]

Controversially, Hakan Seckinelgin has raised the possibility that the usage of ‘LGBT’ leads to a ‘globalization of homophobia’. Following this line of argumentation, LGBT human rights rhetoric could be seen as the cause of the recent backlash in Indonesia. Seckinelgin argues that these categories reinforces notions of homosexuality as excessive westernization, which is used to further stigmatize and demonize the work of human rights defenders as ‘foreign’ and dangerous to indigenous culture. Consequently, authorities become reluctant to support these organizations. Furthermore, LGBT identification makes people recognizable in larger political contexts, allowing them to be targeted for disciplining and violence.[viii]

This notion must be somewhat complicated. Whilst the usage of LGBT human rights rhetoric and LGBT human rights events have raised the visibility of non-normative sexuality and gender in Indonesia, this visibility has not wholly been due to human rights rhetoric. Rather, it fits within a broader conservative trend in Indonesian society. Stricter norms of heteronormative morality were enforced by the government, following the growing influence of conservative Islam on the state, since the fall of the authoritarian regime in 1998. Such a narrow construction makes all those that fall outside it more visible. Additionally, the category ‘LGBT’ was not completely forced upon Indonesian subjects: they were able to reject the category, or re-appropriate it when needed.
Nevertheless, the framing of rights as ‘LGBT human rights’, mostly through its exclusion of much gender and sexuality variance at local non-western sites, complicates the legitimacy of its universal applicability. SOGI rights can be more convincingly claimed to have universal applicability, since the term is less inherently exclusive, and thus may be more appropriate in the Indonesian context.