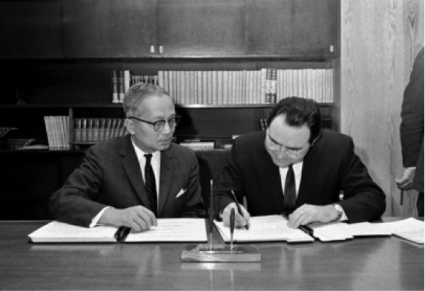 This hypocrisy in policy made me decide to look deeper into the Dutch national policy on human rights. While this is a fairly new field of research, it posed some challenges in finding the right sources. This is something also acknowledged by one of the pioneers of the field, Barbara Oomen, in her book Rights for Others.[II] Oomen sets out to explore the Dutch national policy on human rights and focuses mainly on the Dutch parliament. I decided to use her book as a starting point to look at the role of human rights in de Dutch ministries. In my research I focused on how the Dutch government has implemented the Convention on the Elimination of All Forms of Racial Discrimination (CERD) in 1966. This UN convention is especially interesting because the Dutch played an important part in the drafting of the convention. In addition to this, the convention had a clause that demanded an implementation act of all countries signing the convention. In light of the Dutch international position and their affiliation with the draw-up process of the convention, the response of the Dutch government is rather shocking. The Dutch were extremely hesitant with regard to implementing the convention.

To find out about the responses of the ministers on the convention and its clause that demanded an implementation act, I investigated their correspondence on the implementation act. The correspondence showed that the ministers judged the act as an unnecessary ‘decoration of the Dutch law’.[III] This strong resistance can be explained through several aspects. First and foremost, the Dutch ministers did not acknowledge the existence of any form of racism and of racial issues in the Netherlands. The Dutch government explained that even if there were issues they were incidental and had to be considered ‘un-Dutch’. In addition to this they thought the issues could be better solved by local politicians. Therefore the Dutch ministers considered the implementation act to be redundant. The claim of the Dutch government that there were no racial issues in the 1960s in the Netherlands, has been contradicted by many contemporary researchers. For instance by Rob Witte in his book Al eeuwenlang een gastvrij volk: racistisch geweld en overheidsreacties in Nederland (1950-2009), where he addresses the absence of legislation on racial issues in the Netherlands 1960’s.[IV] But even in the late 1960’s, the Dutch public television made an episode on racial prejudice and found that there were many racial issues within Dutch society.[V]

Another aspect that contributed to the Dutch response is that the ministers saw the UN conventions as only aimed at the elevation of ‘backward countries’. As they considered themselves as anything but backward, these conventions naturally did not apply to the Netherlands.

A last aspect that I would like to discuss here is that the Dutch legal culture played an important part in the resistance of the Dutch government. The Dutch often prefer to  deal with issues without developing a very extensive legislation. Incomplete legislation is also a way that allows the Dutch government to place the responsibility on its citizens when it comes to dealing with an issue like racism. Even at present this principle is used by for instance the Dutch Prime Minister Mark Rutte. In 2011 he said, for example: ‘Discrimination is the antipode to the spirit of citizenship. It hurts people and stops engagement with society […] it is up to the inhabitants of this country to shape community and to get rid of the prejudice and discrimination […] It is a civic duty to counter discrimination […] the cabinet leaves civil responsibility where it belongs; with the citizens themselves.’[VI] The attitude of the Dutch government concerning race issues seems to have experienced very little change over the course of fifty years. Even though steps are taken by the Dutch government when it comes to addressing racial issues: for example with the drafting of the General Act on Equal Treatment in 1994. However, the government still considers it the duty of the civilians to address these issues.

A suggestion for follow-up research would be to look at the current ratio of international and national policy on human rights, and more specifically human rights regarding race in the Netherlands. This is especially interesting because of the current societal discussion on the racial character of ‘zwarte piet’ or ‘black pete’. Concerning this issue, the government still puts the responsibility on its citizens and considers political intervention unnecessary, even when use of the character has resulted in a lot of protest and unrest at events where the character appears. Is the reluctance to act on these issues from a human rights perspective too far embedded in our political and legal culture? When it concerns international legislation definitely not, as the Dutch seem to love using a human rights as a yardstick. Nationally, however, a lot of progress is still to be made.

From the 2000’s onwards, provincial bylaws have been implemented in Indonesia that have criminalized certain types of same-sexual practices. This was followed in 2006 by a similar nation-wide law. LGBT human rights organization OutRight Action International has described this process as ‘creeping criminalization’, through which those who engage in same-sexual activities were put in an increasingly precarious situation.

Student Blog III: UNICEF and their use of the concept ‘human rights’

The concept human rights is nowadays commonly used to strive for a certain level of development by global organisations and governments. This also applies to development aid organisation UNICEF, which is frequently using the term to define their goals. However, it is striking that not more than twenty years ago the concept was not used at all by UNICEF.