The date of the adoption of  the Universal Declaration of Human Rights is clear: December 10th, 1948. However, the history of its utilization in domains like politics, international law and social activism is way vaguer. In 2010, Samuel Moyn shook up the debate about the history of human rights with his groundbreaking ‘The Last Utopia’. In his book, he directs attention to a very limited political engagement with human rights before the late 1970s.[1] Though his argument is very convincing, historians have the task to look at examples that refute his argument in order to identify possible shortcomings. In this blog, I will try to highlight a possible shortcoming of Moyns work by showing how the Dutch Catholic party used human rights to escape Cold War bipolarity in the late 1960s.

After the Second World War, Western-European countries found a new spirit in which they embraced democracy and started working together in the European Economic Community. However, not all Western-European countries shared in this spirit. At the southern border of the continent, you could still find authoritarian regimes that dated back to the ages before the Second World War and were no part of the EEC: Franco’s Spain and Salazar’s Portugal. These authoritarian regimes lasted until respectively 1975 and 1974. 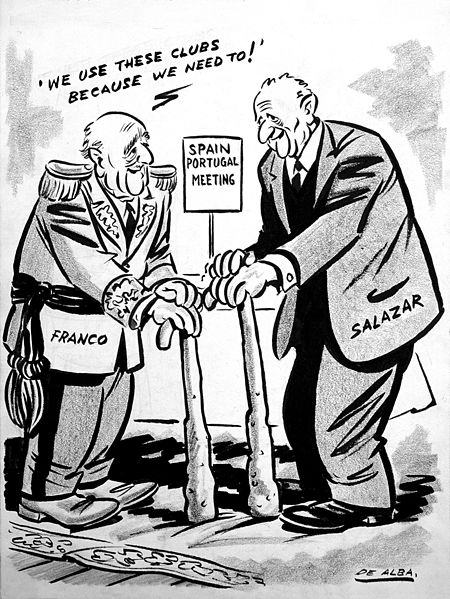 Cartoon in the Washington Daily by Joaquin de Alba Carmona

At some point, the countries of Western Europe could not ignore their authoritarian neighbors and had to take position. Debates about Spain and Portugal in Western European countries were often divided along Cold War lines. The left-wing parties were in favor of tough measures against Spain and Portugal. Some even demanded their exclusion from international organizations. Right-wing parties argued that such isolation would make democratic improvement in these countries very unlikely. This was also the case in Dutch parliament. Left-wing parties were most hostile against the Iberian countries, because their suppression of socialism and communism. The Catholic People’s Party (KVP) used to be least hostile to the Iberian authoritarian regimes, as they were both anti-communist and Catholic.[2]

When Spain submitted a request for admission to the EEC in 1966, the relation between the KVP and the Iberian regimes was tested. What would be the position of the KVP towards Spain entering the EEC? The board of the party decided that this question could best be studied within a commission. The ‘commission Spain’ consisted of several foreign affairs experts, not necessarily politicians.[3] Although the commission directed fierce criticism at Spain from the beginning, they initially thought that economic association with the EEC would benefit democratization in the country. The representative of the Catholic trade union, J. Alders, challenged this stance most prominently. He strongly criticized Spain for being a Christian country by name, but ignoring the rights of the Universal Declaration of Human Rights.[4] His contributions brought the UDHR at the center of the debate.

Not all commission-members agreed with the J. Alders’ explanation of human rights as an important international standard. The journalist, J. Rutges, contested the significance of human rights and thought of it as a human fabrication.[5] Alders won the confrontation. The final report included the violations of human rights, as prescribed by the Universal Declaration of Human Rights, as an objection for any association with or admission to the EEC.[6] Eventually, the commission agreed that the Dutch Catholic Party should use human rights as an instrument to assess countries.

Soon after the Commission Spain had published its assessment of Spain, the board asked in 1968 for a comparable assessment of Portugal.[7] Though the incentive in the Portuguese case was less clear, for Portugal had not applied for EEC-membership, the board probably felt that the Catholic party should be consistent in its attitude towards the Iberian regimes. This time controversies regarding the meaning of human rights were absent. The author of the report was D. Van Agt, the later prime minister of the Netherlands (1977-1982). Already in the first draft of the report, he mentions the UDHR as international standard, possibly due to his background in law. He even refers to a report of the relatively young organization Amnesty International to proof human rights violations.[8]

Though there initially was some resistance against human rights as a framework to assess countries, this resistance was never the sentiment among a majority of the members of the commission. A document often referred to in both commissions, was the encyclical Pacem in Terris. The Catholics felt somehow guided by this encyclical from 1963 by Pope John XXIII that explicitly mentions the UDHR as a universal directive. The papal approval of the UDHR provided some initial legitimization, after which progressive Catholics, like those involved in the trade union, brought the concept of human rights to the center of the debate. Within the context of Cold War bipolarity, the Catholic party used human rights to dissociate from allied partners in the camp of anti-communism like Spain and Portugal. It might be interesting to see how this worked out in Catholic parties in other countries. In addition, the agency of the Catholic trade union, or trade unions in general, might be a good angle for future research. Thus, there might be more dynamics in the political development of human rights in the 1960s than Moyn expects.

From the 2000’s onwards, provincial bylaws have been implemented in Indonesia that have criminalized certain types of same-sexual practices. This was followed in 2006 by a similar nation-wide law. LGBT human rights organization OutRight Action International has described this process as ‘creeping criminalization’, through which those who engage in same-sexual activities were put in an increasingly precarious situation.

Student Blog III: UNICEF and their use of the concept ‘human rights’

The concept human rights is nowadays commonly used to strive for a certain level of development by global organisations and governments. This also applies to development aid organisation UNICEF, which is frequently using the term to define their goals. However, it is striking that not more than twenty years ago the concept was not used at all by UNICEF.